As Facebook FB -4.47% revamps its news feed, marketers are assessing their strategies on the platform and bracing to shell out more money to get brands’ content in front of users. On Thursday, Faceboo...
Posted in Marketing on 13 January 2018
Read more

I deleted Facebook off my phone and you should too

I deleted Facebook's app off my phone more than a month ago.  And reader: I feel free.  My days of mindlessly scrolling through random updates from my mom's friends and people I haven't spoken to sinc...
Posted in Digital Entrepreneur on 13 January 2018
Read more

How I Increased My LinkedIn Views By 10x Almost Immediately

For almost as long as I've been writing on the internet, I've been sharing my posts on LinkedIn. To be honest, I did so because it was easy. I just clicked on the little button above and that was that...
Posted in Marketing on 13 January 2018
Read more

More than 60 million brands have Facebook pages. These were created for marketers to connect directly with millions of current or would-be customers. But it’s getting harder and harder to be successfu...
Posted in DTWC Magazine on 01 January 2018
Read more

What Marketers Need to Know About LinkedIn

This story originally appeared on Buffer What if I told you that LinkedIn, a social media platform that is now 14 years old, is the next big opportunity for marketers and brands? While much of the foc...
Posted in Social Media on 28 December 2017
Read more

A Photo Sharing Empire With over 800 million active users, Instagram continues to thrive as the world’s top photo-based social network. Like a major artery, Instagram has served as a carrier of new id...
Posted in Social Media on 28 December 2017
Read more

Hashtags, ever heard of it? Is it really important?

What are #Hashtags? A hashtag is created by including the symbol “#” in front of a word or words without spaces. A hashtag is a label used on social media sites that makes it easier to find informatio...
Posted in Marketing on 25 December 2017
Read more

3 Ways to Make Better Use of Your Business Facebook Page

By Matt Doyle, VP and co-founder of Excel Builders. Every business should take advantage of Facebook's Pages feature. Pages are like a profile just for your business, and there are many reasons you sh...
Posted in Digital Entrepreneur on 21 December 2017
Read more

Travel blogging is a crowded field and it is getting more crowded by the day. After all, the idea of getting paid to travel the world seems like an amazing thing to try to do. You get to visit wonderf...
Posted in Digital Entrepreneur on 21 December 2017
Read more
Font size: + –
Print

SpaceX’s Starman, drifting in a Tesla Roadster, has an incredible view of Earth on Tuesday. (SpaceX Image via YouTube)

High above his home planet, where millions of people are no doubt sitting in traffic in cars of their own, “Starman” drifted effortlessly through a wide open expanse on Tuesday.

The mannequin in a spacesuit — launched aboard SpaceX’s Falcon Heavy rocket on Tuesday — sat in the driver’s seat of Elon Musk’s cherry red Tesla Roadster. With the top down, Starman drove off toward a deep-space orbit listening to David Bowie’s “Life on Mars.” 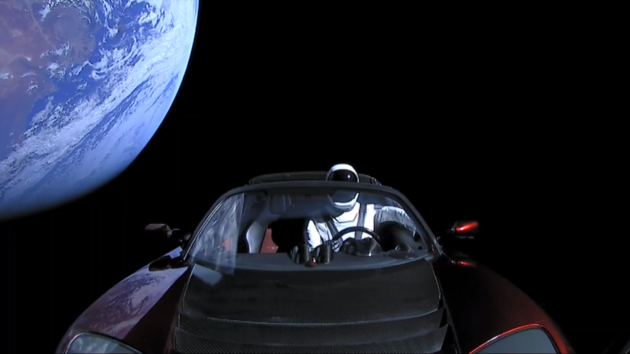 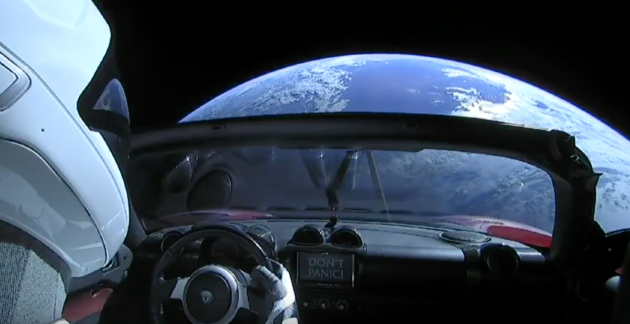 SpaceX beamed a live internet view of the unprecedented adventure via its YouTube feed, where more than 200,000 viewers were watching at one point.

Assorted camera angles captured views from inside the Roadster over Starman’s shoulder; from out in front of the hood looking back; and from off the driver’s side of the car looking back toward Starman.

Earth continuously moved into the frame to serve as a dramatic blue backdrop against an otherwise deep, black setting.

A toy Roadster sat on the dashboard, with a tiny toy Starman sitting inside.

Clearly amused by his own stunt, Musk tweeted that “apparently, there is a car in orbit around Earth,” later adding that the Tesla was over Australia.

SpaceX’s live-video view of Starman was available for only a limited time.

“The battery’s going to last about 12 hours from launch, roughly, and after that it’s just going to be out there in deep space for maybe millions or billions of years, who knows?” Musk said. “Maybe it’ll be discovered by some future alien race, thinking, ‘What were these guys doing? Did they worship this car? Why do they have a little car in the car?’ That’ll really confuse them.”

Although Starman is no longer live, you can catch a few hours’ worth of the Roadster’s space odyssey, courtesy of this archived YouTube clip:

© Flipboard and it's respective authors

By accepting you will be accessing a service provided by a third-party external to https://www.divethewebcreations.biz/

Watch ‘Starman’ drift: SpaceX’s Tesla reaches the ultimate cruising altitude and rides off into space
Marketers Say Facebook’s News Feed Update Will Be ‘Nail in the Coffin’ for Organic Posts
I deleted Facebook off my phone and you should too
Social Media Cheat Sheet 2017: Must-Have Image Sizes!
3 Ways Marketers Can Rise Above the Facebook Noise
When Social Media Marketing Goes Right (And How to Copy It)
JomSocial 4.7.5: Google Login support and more
Create Awesome Photo Effects With These 20 Amazing Photoshop Tutorials
JomSocial 4.7.4 released for new Social login, 1500+ new Emoji and more !
How to Create a Social Media Marketing Strategy From Scratch